So we’ve finally done it 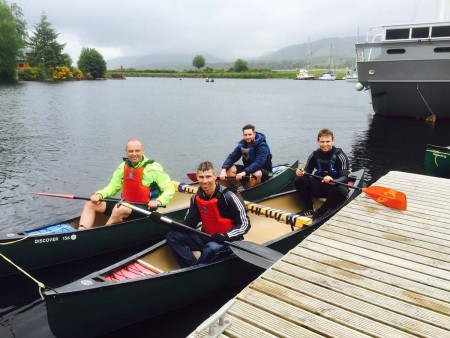 Team Henshalls set ourselves an epic challenge and after months of training, we’ve reached our goal. We took on the Ben Nevis Challenge – easy to say but trust me, not so easy to do!

First there was the trek up and down the famous mountain, followed by a 15-mile cycle ride around Fort William, a three kilometre canoe stint around Loch Lochy, and another 10-mile cycle back to Fort William.

Now why on earth would we take on such an adventure you may ask? To raise cash for Severn Hospice, that’s why. And our efforts have brought in just over £3,500 for the charity, so thank you to everyone who gave us such generous support.

It was a challenge right from the start – it took us over seven hours to even get to Fort William before we could begin!

The following day we had a 5am wake-up call and crossed the start line at 6.36am precisely!

It was a daunting sight when we arrived at the foot of Ben Nevis after a 3 mile walk out of Fort William, but we began a steady climb mostly surrounded by mist and fog. Our progress was good though and we overtook several teams that had started before us.

But then came the start of the snow climb, around 45 minutes from the summit. It was very cold, soft snow under foot and really tough going on the legs! Now it was our turn to be overtaken by a few teams, including a team of nuns!

At the summit itself, we felt a real sense of relief – but given the temperature we didn’t hang around, just took on some water, jelly babies, wine gums and peanuts, and then started our descent.

After initially “skiing” the first part of the slopes, we reached the rocks – the younger members of our team, Danny and Alex, flew down but myself and Ronnie (being the senior members of the team) were struggling with knees, ankles and hips!

Back at base camp in Fort William, more peanuts, chocolate, bananas and a cup of tea followed before we took to the bikes for our first 15-mile stint out of Fort William toward Torlundy. A detour led us to some stunning scenery along River Lochy (plus 2 nasty climbs!!), before we rejoined the main road into Spean Bridge and another nasty climb, before we dropped down into Gairlochy on the banks of Loch Lochy. After more peanuts, chocolate, and another cuppa we got into the canoes and embarked on a 3k trip out into the loch and back..

The last leg was a further 10 mile bike ride along the opposite of River Lochy back to Fort William – phew! This challenge was certainly a tough test, not helped by a puncture to Alex’ back wheel.

But we did it! 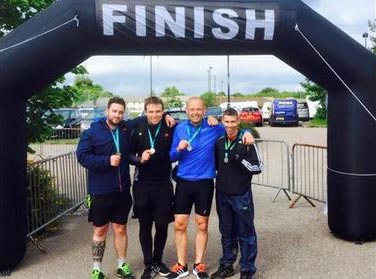 A finishing time of 10 hours 24 minutes, and 15th place out of 88 teams. We even won the award for the best team selfie photo on the day!

Team Henshalls are tough cookies – and we’re always up for a challenge! Here’s to the next one! Are you in??