I was on holiday a few years ago with some friends. The lady-half of a couple we had befriended was napping on a lilo in the pool, so Dave and I thought it would be hilarious to ‘bomb’ her. 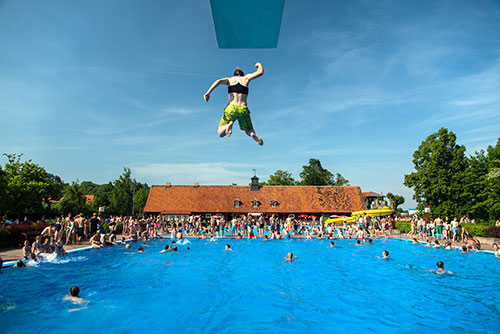 We clutched our knees as we crashed into the water either side of her, but we were a little perplexed by her lack of humour as she reprimanded us, at full volume, like two naughty schoolboys. A few minutes later, still chuckling, I started to explain to a German family what we’d done, little realising that everyone else around the pool was either open-mouthed in disbelief or in fits of tearful laughter watching the confused family trying to understand why I was bringing up the war again.

I’ve also bombed at a wedding. My best-man’s speech was not received well by his parents, and my closing naughty joke was, in retrospect, a bit too naughty for the grandparents.

I bombed the Red Arrows a few months ago too. Until that moment I wouldn’t have had a clue what photo-bombing was, and would have guessed at some sort of precision radiation attack. All I did was lean over and smile when I saw my colleague taking a photo of their team leader. Apparently the fact that my horizontal head grinning vacantly half-way down the side of the photo means I bombed his photo.

Three meanings of bombing, all of which you’ll find in a dictionary, and I haven’t mentioned Barnes Wallis yet.

So we welcome Photo-bomb to our language, along with many more such as Selfie, and Fracking.

Fracking On its Way to Shropshire

Fracking has become a really controversial topic and if the rumours are to be believed, it could well be on its way to Shropshire. Short for Hydraulic Fracturing, Fracking was originally banned in 2011 after exploratory fracking in Lancashire caused two small earthquakes. But in 2012, the Government lifted the ban. It involves injecting high-pressure fluid into a drilled well to fracture rock thousands of metres below the ground in order to release gas and oil. The Frackers are mainly looking to capture shale gas a natural gas made up mostly of methane.

Could Your Business be Affected?

Businesses could be particularly badly affected if a Fracking site is designated near to their workplace. What impact will it have on your day-to-day operation? Will it interfere with your business or access to your site? And what about the environmental effects it may leave behind?

The best way to tackle any worries you may have is to get involved take part in the initial planning and consultation process. If exploratory drilling is proposed in our area, find out information such as how long the project will take and which roads the lorries will be using so that you can raise any concerns.

The Frackers will also have to meet strict environmental guidelines so the risk of contamination to things like your water supply should be low.

Your insurance should cover any possible fracking damage to your property but it may rule out compensation for damage to water sources or the land your building sits on, so check the small print carefully.